Like many Americans, I was raised in a very conservative Evangelical Christian environment, dutifully attending church each week, and blindly accepting everything I was taught about God, Jesus and the Bible.

Creation of the Universe in six twenty-four hour days? Check.

One pair of humans responsible for spawning the entire race? Definitely.

A global flood that covered the highest mountains and carved the Grand Canyon in a matter of weeks? Yup.

Dude got swallowed by a whale and lived to tell about it? No problem.

A God who demanded the death of Himself (…or 1 of 3 of Himselves?) to save all of mankind from… Himself? Sure! Why not?

Actually, I can’t really be faulted for believing all of these things, nor can the countless others who do, as well.  You see, I was systematically conditioned to believe these things, and more, essentially from birth. I even attended schools affiliated with my church from 2nd grade through my first year of college, so my worldview remained locked in this exceptionally narrow groove of Christianity until early adulthood.

Fortunately, at some point along the way, I developed a love for Science. Especially Physics and Astronomy. Now, mind you, while I was still in church school, my teachers were very careful to avoid controversial topics, or devise “creative” (pun intended) explanations when apparent conflicts arose. Perhaps the parallax measurement of distant stars only “seems” to indicate they are millions of light-years away because God is trying to trick us. Maybe the fossil record was fabricated by God to test our faith. God probably carved all the bends and twists in the Grand Canyon with his right pinky finger so that eons of water erosion wouldn’t be necessary. A real time-saver!

Despite their best efforts, I managed to get enough exposure in the classroom and through personal study that, over time, most of these beliefs fell away. Thanks to my obsession with Science, it was not a very big leap for me to accept evolution over creation, ancient geology over the Flood account, and “common sense” over faith.

By my early twenties, I was firmly in the Agnostic camp, or a variant I like to call “Apatheism”. Not only did I not know if there was a God or not, I didn’t really care that much. I was quite content to occupy my twenties and thirties with developing my career, raising a family, and generally ignoring anything having to do with God or spirituality.

But as with most things in life, ignoring God did not make Him go away.

I was in my late 30s when, suddenly (and quite unexpectedly), I found myself dissatisfied with my ambivalence toward God. While there was no defining “come to Jesus” moment that I can pinpoint, a definite, tangible change was undeniable. I became intensely fascinated with the intersection of Science and faith and began reading, watching and listening voraciously to anything I could find on the topic. Books, YouTube videos, podcasts – you name it, I consumed it; I was obsessed!

I soon began to realize that there was a LOT I didn’t know about Christianity! Sheltered within the Evangelical bubble as I was growing up, I had never even heard of many terms and ideas that are quite prolific within the larger Christian faith. I mean, what were “Mainline” Protestants, anyway? And what was this mysterious “Eastern Orthodox” church I’d only heard rumors of? You mean there’s a term called “Penal Substitutionary Atonement” and NOT every Christian accepts it by default? And you’re saying that there are many Christians who believe that a literal interpretation of the Bible is not the source of perfect scientific and historical truth? Heresy, I say! Heresy!

It turns out that America’s Evangelical Christian Fundamentalism is a relatively recent phenomenon, having risen to prominence in the mid-19th century, and represents only a fraction of the diverse beliefs shared by Christians around the world. Gaining a more complete understanding of Church history allowed me to finally put my Evangelical roots in their proper context among the many, many other variations of Christian faith. I still find Church history endlessly fascinating, especially the early, pre-Schism period, when early Christian leaders were still trying to figure things out and decide how to respond to the life and death of this man named Jesus, who had brought so much light into the world. I find it most tragic that so many Evangelical Christians are deprived of the knowledge of this rich tradition. I strongly believe that this lack of knowledge and the forcing of young people into the Evangelical mold, which allows so little room for questions, doubts, and plurality of belief, is the single greatest factor in why so many young adults (myself included) abandon Christianity.

For a first-year college student who is digging deeply into evolutionary theory or Big Bang cosmology for the first time, just knowing that there are countless devoted (though, admittedly, mostly non-Evangelical) Christians who accept these scientific principles as God’s way of fashioning our Universe, might be all they need to avoid wholesale rejection of their faith. Confining their view of God and Christianity into the narrow Evangelical box limits their options when that box fails. That’s what happened to me, and I believe that’s what happens to thousands of young people every year.

I created SEEKERS Anonymous to be a safe space for individuals seeking Truth. Many may find themselves in a faith community, as I once did, that discourages or even actively suppresses doubt, questions, and skepticism, especially when it involves the Sciences. People trapped in these environments may be unable to bring their concerns to a pastor or other members without the fear of being judged or even ostracized from the community. Others may have been committed Atheists their entire lives, but have begun questioning their position. Perhaps they are awakening to the idea that there are aspects of our Universe that defy the world’s most brilliant minds, and stagger our imaginations, and that these wonders maybe, just maybe, point toward a larger Force at work here.  For both of these groups, and all those in between, SA offers a judgment-free zone where they can find other like-minded people who are seeking the same answers.

SA is a community that values each individual’s beliefs (or lack thereof), and supports the pursuit of Truth above all else. We are privileged to join a rapidly growing number of similar communities that are emerging in progressive and post-Christian circles, some of which can be found on our Community Resources page.

My story is not unique.

There are countless other stories like mine, of people who don’t know what they can believe anymore, but who yearn to believe in something greater than themselves. Who are profoundly moved when they gaze into a glittering night sky or stand barefoot in the sand listening to waves crashing against a rocky shore.  Whose hearts soar along with the chords of a classical masterpiece or are swept away in the beauty of a sunset. Who see life, in all its myriad forms, as a miracle worth celebrating, but are still searching for Someone to thank for this precious gift.

I am still on a journey that may one day lead me back to some form of faith; I’m not sure yet. But if it does, I know it will be a faith that is not blind to Science or locked into a single do-or-die interpretation of scripture or tradition.

So much of what Jesus says in the gospels is true and should resonate with all of us, regardless of religious persuasion. That’s why even Islam and Buddhism acknowledge him as a spiritual teacher worth listening to. Jesus taught of universal love and empathy. He was a friend to the downtrodden and marginalized, and rejected a culture of hypocrisy and intolerance. He spoke truth to power at a time when doing so was exceedingly dangerous.

And he died for it.

Even without the faith of my childhood, I think I could follow someone like that. One day, I might even be able to call myself a Christian again.

Until then, I seek. 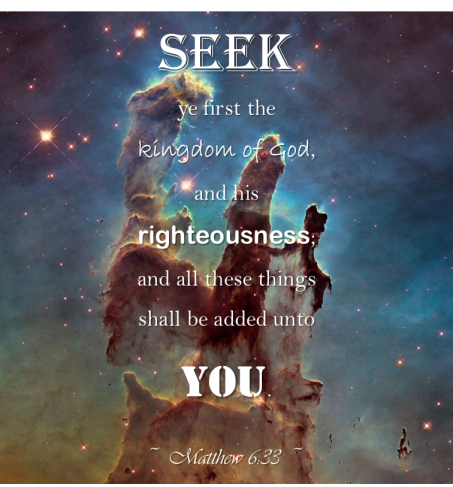